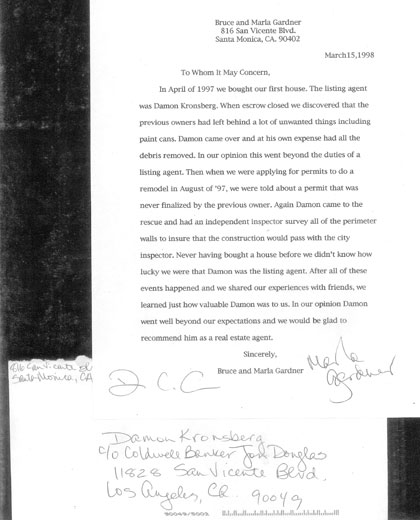 In April of 1997 we bought our first house. The listing agent was Damon Kronsberg. When escrow closed we discovered that the previous owners had left behind a lot of unwanted things including paint cans. Damon came over and at his own expense had all the debris removed. In our opinion this went beyond the duties of the listing agent.

Then when we were applying for permits to do a remodel in August of 1997, we were told about a permit that was never finalized by the previous owner. Again Damon came to the rescue and had an independent inspector survey all of the perimeter walls to ensure that the construction would pass with the city inspector. Never having bought a house before we didn’t know how lucky we were that Damon was the listing agent.

After all of these events happened and we shared our experiences with friends, we learned just how valuable Damon was to us. In our opinion Damon went well beyond our expectations and we would be glad to recommend him as a real estate agent.